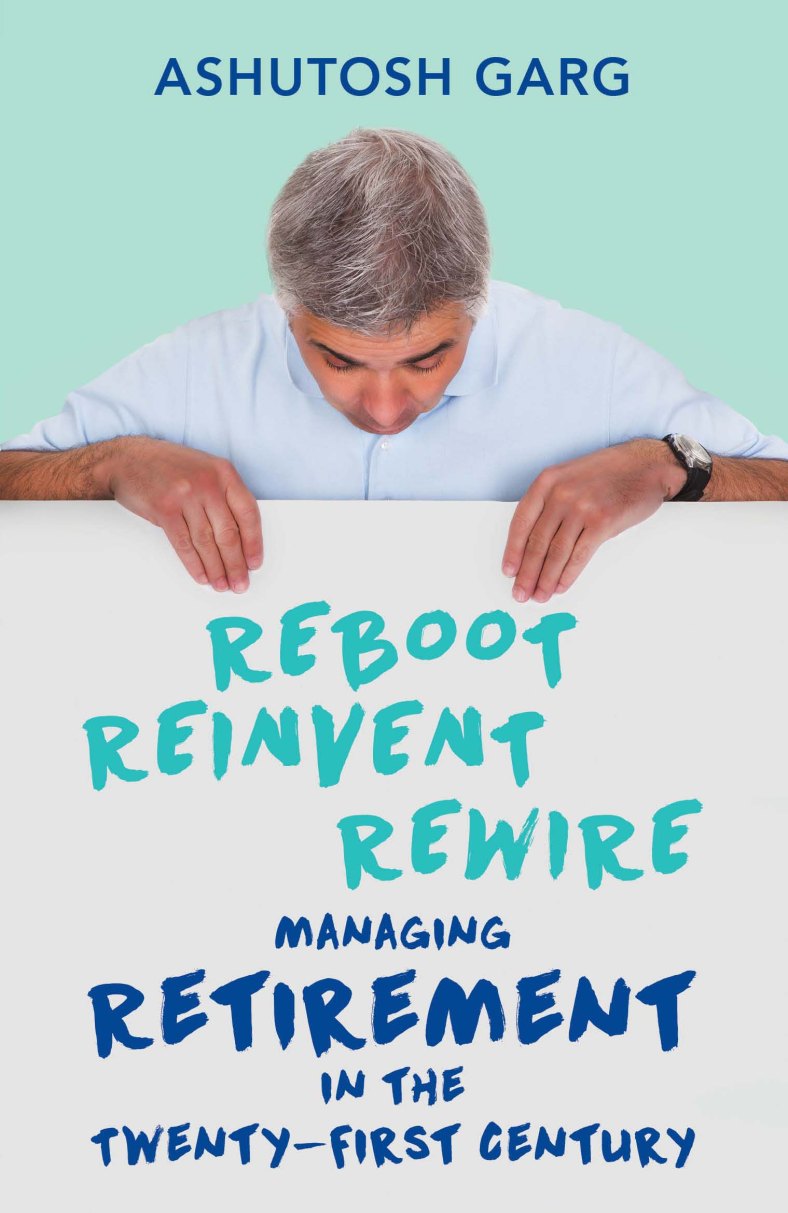 In a country which is being spoken about as the “youngest” country in the world, where over 700 million of us are under the age of 30, we have an increasing number of people who are growing old as well.

Just like the baby boomers in USA, India too has its post-independence children, born after 1947. The oldest of these children will be in their early to late-sixties in 2015 and a majority of these pre-independence kids may probably still be working but thinking of the impending retirement.

Looking back on the years gone by I am sometimes amazed at the resilience and persistence exhibited by us mere mortals in our lives. In our effort to make ends meet and prepare for our future we are often forced to endure thankless and sometimes abusive work environments for years on end. Stress becomes our new best friend as we attempt to pay never ending day to day bills while somehow also providing for big ticket expenses like education, clothes, cars and weddings. We are forced to delay the pursuit of our own interests and passions because there is either not enough time or not sufficient free money.

As I pondered over and debated my own reality, I was curious about my peers’ attitudes toward retirement

I spoke with many friends, both men and women over 60 who were either already retired or were just starting to think about it. What I found most shocking was the level of denial and postponement in thinking about the subject of retirement. While many people had been diligent about saving and investing, few had considered the psychological jolt that usually accompanies the end of an active working career.

My first realisation was that I would have a much greater degree of freedom under my control. I don’t have to do but I do what I please to do. I have therefore redefined retirement to mean “Reaching a stage in life when one has the freedom to do what one wants.” I am reminded of an old poem I read

At ten, we have just fun

At twenty, we are still naughty

At thirty, we think lofty

At forty, we get shifty

At fifty, we confront reality

At, sixty, we seek serenity

However in today’s day and age, the retirement paradigm has changed completely from what we have seen with our parents and probably our grandparents. While the message may be the same, the ages have certainly changed over the past three decades.

“Yesterday’s 60 is today’s 40” said a close friend to me when we were discussing getting older.

“Age is only a number” said another

So working in our regular jobs as employees till we are between 60 and 65 is something we can normally expect to do as per ore terms of employment.

When I started work in 1979 at the age of 22 the retirement age in my company was 52 years and I used to think that three decades was a long way off. A few years later the retirement age was raised to 55 and like me, a lot of young managers in the company complained about how top management was interfering with our careers by allowing the “oldies” to stay on for another 3 years! Today as I approach 58, I wonder what it would have been like to have retired when I consider that I am at the peak of my career.

As we reach the age of superannuation or retirement, I see so many of friends becoming insecure and afraid of becoming irrelevant. When it is time to retire, we forget what we told ourselves. What has changed in the last three decades that we are afraid to slow down or pace of work or recognize that our minds and bodies are ageing?

Most of us would have achieved what one set out to at the start of one’s career or we would have accepted that what one has achieved is all that is possible in the career that we have chosen. We would have also seen the push coming from our younger colleagues in the work place to move aside to let the youth brigade move forward faster.

There is no point in agonizing over the past because there is nothing that we can do about it. I have always believed in looking ahead with a positive frame of mind.

Yet most people if they have led a relatively healthy life will, with modern medicine see our life expectancy increase significantly. Our parents would generally be well into their eighties and we could expect them to live in to their nineties. Given the right set of genes, there is no reason why we would not live to at least 90 years of age, maybe more if we have not abused our body too much.

Retirement is not the end of the world.

It is the beginning of a new and more fulfilling life without the stresses and strains, the pulls and pressures we had when we were young. We may have looked forward to retirement but a fulfilling retirement will not just happen. You have to plan for it and you have to plan by including the most important person in your life, your spouse. Unless both of you are in agreement with your plans, prepare for dissonance in both your lives.

At the same time, I realized that with ageing parents, the baton for the next generation was passing to me. The next generation of children in my family was looking up to me. When I visited their homes, I would be seated first. I would be served first at dinner and when I spoke they would listen attentively. It was difficult to handle this contradiction. On the one hand I was beginning to feel less relevant at work and in the society that I knew and on the other hand I was being respected more by the next generation.

Let me draw a parallel to retirement with a setback.

It is a stop in our life and we need to restart with a new direction and with renewed vigour. Think back to a recent setback or disappointment in your career or personal life. Think about how you felt. How long did it take for you to bounce back? Did you formulate an action plan? Did you blame yourself, or others? Did you eat a big plate of sweets or ice cream to give yourself a “sugar fix”?

How you handle a setback defines who you are. Let’s say there are two ends of the spectrum – the optimist and the pessimist. You may be at any point of the spectrum.

How can you move along your place on the retirement spectrum to be on the positive side as you look to reinvent, reboot and rewire your life?

Examine your behaviour pattern. Be honest with yourself.

Cast off society’s belief about aging and retirement. Optimists may have greater success, health and happiness. Pessimists may experience a self-fulfilling prophecy of unhappiness and despair. You choose your spot on the spectrum from where you will make the start to rebooting your life.

In conclusion it is my belief our new life ahead can be the adventure of a lifetime. It doesn’t have to be a permanent rest. Ask yourself whether your negative beliefs about retirement are getting in the way of how you really want to live the “third half” of your life.

The author is the founder Chairman of Guardian Pharmacies and the author of the best-selling books, Reboot. Reinvent. Rewire: Managing Retirement in the 21st Century; The Corner Office and The Buck Stops Here – Learnings of a #Startup Entrepreneur.

“I want to be my own boss” is a thought that has definitely crossed the minds of most corporate managers at sometime in their careers.

Yet most people hesitate to take this step for one reason or another. Giving up what one has today, including a regular pay check and the perquisites that come with the job to pursue a “dream” definitely appears to be an intimidating challenge for anyone who is contemplating changing his status quo. Yet for people who have made this change, the realisation is why they took so long to take this step.

It is never too late or too early to make a start. Getting over one’s own fears and anxieties is possibly the biggest challenge that you will face. Ensuring support for one’s family helps every entrepreneur to take the plunge faster.

Be prepared for a complete lifestyle change. An entrepreneur’s job is a lonely one. Days will blend into nights and weekdays into weekends. No job will be too small or big and what you take for granted as a corporate manager will be a challenge you will have to address personally. Yet, the fruits of your efforts will be visible at the end of each day.

Find out what is your calling and stay the course. Once you have made up your mind on what you want to do, take a plunge with 100% commitment. Write out a realistic business plan for yourself. Part time entrepreneurial ventures have never succeeded. Once you have started your journey, you will be confronted with challenges that you would never have imagined. Yet, no challenge will be insurmountable.

Funds will be a challenge when you start but will become a commodity when you start to succeed. A family investing its savings into a business is a strong message of confidence for any banker or private equity investor. Manage cash very carefully – costs have a habit of running out of control and revenues lag behind what you may have planned for.

Getting a strong management team and empowering them is essential for success but finding the right talent for a start up will be a challenge. Good managers will not agree to join a start up and a start up entrepreneur will not be able to afford such managers. Therefore, it is necessary to draw upon skills of friends and family and part time managers to start any new enterprise.

The author is the Chairman of Guardian Pharmacies and the author of the best selling books, Reboot. Reinvent. Rewire: Managing Retirement in the 21st Century; The Corner Office and The Buck Stops Here – Learnings of a #Startup Entrepreneur.

#coronaindia - #diwali in #Gurgaon #9minat9pm
#Sunrise in #Gurgaon. Never seen such a clear sky before.
@nespresso - The perfect brew!
@followtbcy - The Brand Called You Season 1 ends with 250 recordings of incredible stories of outstanding achievers. See these on www.tbcy.in & all major podcast platforms. Write to us if you wish to nominate anyone or yourself to share your story in Season 2.
Wish everyone a Very Happy, Healthy and Prosperous New Year.
Merry Christmas From the entire team of The Brand Called You @followtbcy